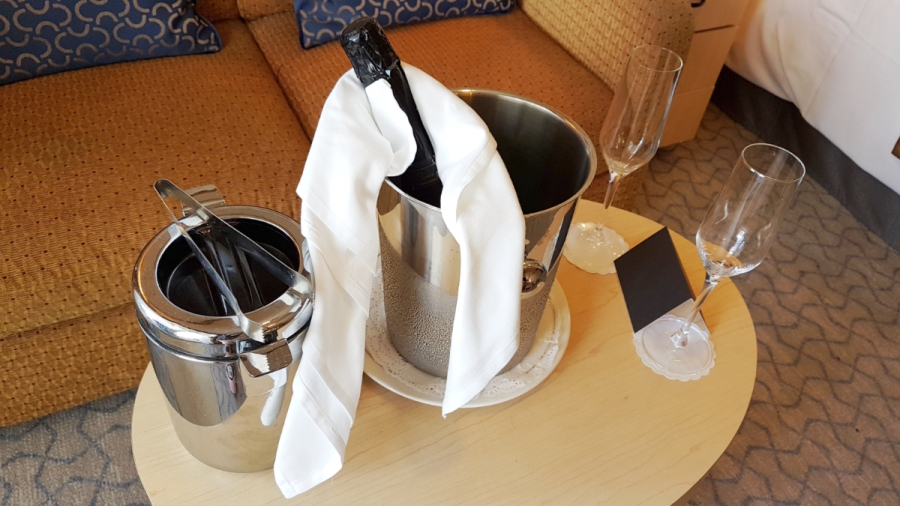 On awakening with a start this morning at 4.45am, it took a few seconds to realise that I was not in my own bed at home, but rather a comfortable room at the Heathrow Lodge, next to the famous airport. Of course! We were due to fly out to Rome today, then travel on to the port of Civitavecchia to join the fabulous Cunard ship, Queen Victoria, and we’d flown down last night from Newcastle Airport, ready for our early start this morning. 🙂

Yes! We are off on another cruise for a couple of weeks, this time taking in ports in the Mediterranean and the Adriatic Seas, and celebrating our 30th Wedding Anniversary. We love the Queen Victoria and have had the pleasure of cruising on her twice before; on her Maiden Voyage in 2007 and, more recently, for the poignant “Lusitania Remembered” voyage in 2015. We were so excited to be going back!

We blearily got dressed and trundled our cases along to the conveniently-located bus stop across the road, where a free airport bus picked us up at 05:25 to take us to Terminal 5, ready to check in for our 07:45 British Airways flight to Rome. Despite the early hour the bus was packed, mainly with Heathrow Airport staff going to work.

We arrived at the terminal and joined the long queue for check-in. The BA flight had been chartered by Cunard Line, and all the other passengers’ cases had luggage tags firmly affixed to them, advising which deck and stateroom number they’d been allocated on the ship. Our is Deck 5, stateroom number 5130.

Eventually we reached the front of the queue and got rid of our cases and received our boarding passes; we would board at Gate B33 when the time came. Then off we went through security and along to the shops, bars and cafés airside. We hadn’t had any breakfast yet, so we decided to find a little bar or eaterie and get something to eat and a cuppa.

We wandered around for a bit, then found a small Wetherspoons-type place serving a breakfast menu; it was quite near to a departure board so we could keep an eye on when our flight would be called. We enjoyed a hot bacon sarnie and some good strong coffee, then Trevor looked at the board for the BA Rome flight and said “It’s been moved to 08:30 now.” It looked as if our flight had been delayed for 45 minutes.

After breakfast we had a look around the duty-free shop and bought some magazines in WH Smith. Then we had another look at the departure board – it still wasn’t saying “Go to gate” and it still showed a time of 08:30. It was only 07:35 so we still had plenty of time.

I went to the loo and got freshened up a bit, then we decided to take a slow stroll along to the departure gate, even though there was still nothing appearing on the departure board about our flight. When we got there, there was nobody about. We looked up at the board; it still said the flight was due to depart at 08:30 hours, and it was only 07:40. Where was everybody?

Just then, Trevor glanced over at Gate B33 and saw the sign which said they were boarding passengers for the 07:45 flight. At the same time, an airport official saw us and asked for our names. When we said “King” he said “You’d better come quickly; we’ve been paging you for the last 10 minutes and the aircraft is about to leave. You might be too late!”. I replied “But it says 08:30 on the board – it’s running late”. “No,” he replied. “That’s the next flight!”

Apparently, our flight was running perfectly on time and everybody had boarded except us, and they were just about to close the gate and remove our luggage from the aircraft! The guy rang through to see if they would still board us and, luckily, they let us on – with seconds to spare. As soon as we were in our seats with the seatbelts fastened, the aircraft was pushed back from the gate. We’d caught our flight by the skin of our teeth! Phew – how lucky were we!

It seems our BA flight wasn’t showing on the board because it was a special charter flight by Cunard. The other passengers must have made their way directly to the gate, whereas we’d spent time in Wetherspoon’s and the duty-free shops. Twenty seconds later and we’d have missed our flight!

Anyway, here we were at last and, as the aircraft took to the skies, we settled back to enjoy the flight with the happy anticipation of another cruise to come.

We enjoyed a few drinks and snacks on the comparatively-short flight to Rome and came in to land on time. Then it was off to the baggage carousel to claim our cases before following the staff bearing “Cunard” signs to the waiting coaches. Other staff held up signs saying “Azamara” and “Holland America”, proclaiming the names of other cruise lines and their ships which were also in the port of Civitavecchia, where we were heading.

The journey took just over an hour, and then we glimpsed the sparkling Mediterranean Sea in the distance, followed by several ships’ funnels. We soon spotted the distinctive red funnel of the Queen Victoria, and we saw the lovely Azamara Journey, a beautiful ship we cruised on in 2011, to the French and Italian riviera. The Journey looked as if she’d had a refit, as her hull was now painted black (it had been white previously). We are already booked on one the Journey’s sister ships, the Azamara Quest, in May 2019 for a transpacific voyage. But all that is in the future, and for now we were excited to be back on the good old Queen Victoria.

Once inside the cruise terminal, we were given priority embarkation as we are Platinum members of the Cunard World Club. It therefore took no time at all to be issued with our cruise cards and we happily made our way dockside and up the gangplank, and into the familiar plush interior of the ship.

We are in a balcony stateroom on Deck 5, number 5130, on the port side of the ship. As usual, it was airy and spacious with a large king-size bed with crisp Egyptian cotton sheets, a settee and chair and small coffee table, and floor-to-ceiling glass doors leading out to our balcony, which contained two deck chairs and a small table. A flat-screen TV adorned one wall, alongside a large mirrored dressing table and chair. On the coffee table was a bottle of prosecco on ice, along with a couple of flutes. 🙂

We dumped our bags and decided to go up to the Lido restaurant on deck 9 and have something light to eat; not too much, as we knew we’d be getting a scrumptious big dinner later on. I therefore just enjoyed some cold meats and salad washed down with a glass of iced water, before we went out and wandered around on deck for a while, enjoying the autumn sunshine. There had been several showers of rain (it poured down on the bus ride from the airport to the cruise port) and here and there the deck was wet. It seemed fine now though, and we hoped it would remain so for the duration of our holiday.

At 5.00pm we had to attend life-boat drill, then it was back to our stateroom to get washed and changed for dinner at six. Tonight the dress code was smart-casual; gentlemen could omit their ties if they wished (but a collared shirt was still required) and ladies could also dress less formally; I wore a flowered dress with a fishtail hemline, and a pair of sparkly sling-back stiletto heels.

When we got to the Britannia Restaurant and made our way to our allocated table #529, we were very surprised to see if was a table for two. We always enjoy the interaction with our fellow passengers and, as such, ask for a table of six or eight, so a table for two was most unusual. We could only assume it is because Trevor’s brother Billy and his wife Carole are joining us for the second week of the cruise, and they had requested sharing a table with us (a table for four), hence the reason for our having a table to ourselves this time.

The meal was delicious as usual. I started off with soused herrings on rye bread, followed by a delicious roasted lamb shank, where the meat just fell off the bone. A tasty cheese board and coffee completed the meal, and then it was time to go along to the theatre for tonight’s entertainment, an Irish female singer called Jacinta Whyte, who has appeared in different West End productions. We enjoyed her show, even though we were starting to flag a bit after our early start.

We therefore finished off the evening by having a night-cap in the Golden Lion pub, before heading back to stateroom 5130 and settling ourselves down for the evening. We had a leisurely day at sea to look forward to tomorrow, so looked forward to a lie-in.