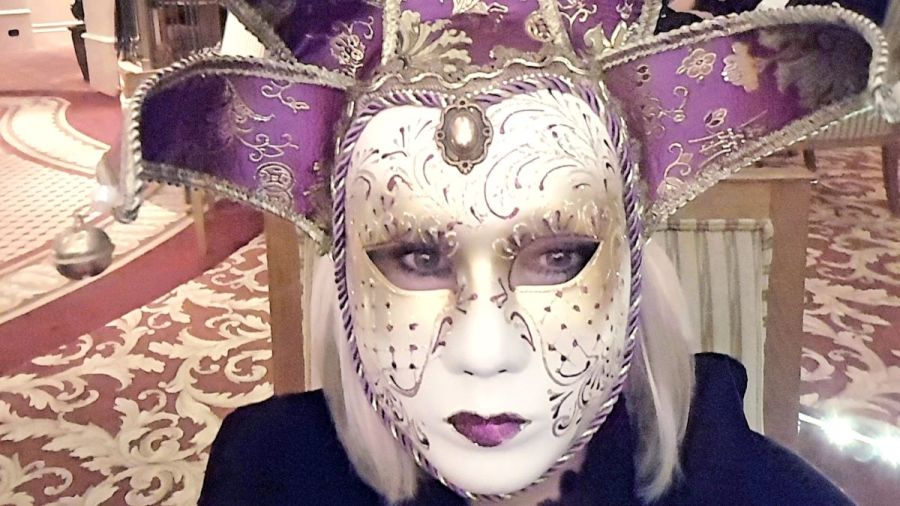 from “The Phantom of the Opera”

Trevor and I were married on 15th October 1988, so today we were celebrating our 30th wedding anniversary, and the Queen Victoria was a great place to be doing it.  However, looking out of our balcony doors all we could see was grey sea and sky, and it looked as if it was raining.

After we’d exchanged cards, we put the bottle of Moët & Chandon into the refrigerator to chill, then went up to the Lido where we were joined by Billy and Carole for a leisurely breakfast.  We extended an invitation to them to join us in our stateroom at 11.00am, the time that we were married.  🙂

After breakfast we ventured out on deck, but it was still raining so we couldn’t go out and do our laps.  Instead, we went along to the Grand Arcade, the row of shops that overlooks the Queen’s Room, and bought a pack of three ‘Queen Victoria’ t-shirts and a fridge magnet, and looked at some of the (expensive!) designer gear.

Returning to our stateroom, we each put on a t-shirt; Trevor chose a black one and I picked the red one, in matching designs.  Erwin, our cabin steward, had been in so the place was nice and tidy to receive our guests.  We then called Billy and Carole and asked them to bring a couple of champagne flutes.  🙂

It was a pity it was too wet to sit out on our balcony,  but once B & C arrived, we popped the cork on the chilled Moët & Chandon, dispensed it into the four flutes, then toasted ourselves and each other and gulped the cold, gorgeous fizz.  Billy and Carole had come bearing a card and gifts; another bottle of champers (this one Lanson Black Label) as well as a wall plaque for me which declared “Champagne Queen” – very appropriate!  I hung it up in the cabin straightaway, and we drank and chatted and laughed for an hour or so.

Trevor and I then decided to go along to the theatre to listen to another of Johnny Beerling’s interesting presentations; this one called “Tom Jones, the Winner from Wales”.  It featured sound clips from interviews with Sir Tom, accompanied by picture stills and video footage, in which he talked about his life and close friendship with Elvis Presley.  The talk was very interesting and finished with musical clips from some of Sir Tom’s many great hit songs.

This brought us nicely up to lunchtime at 1.00pm, where once again we went to the Golden Lion for a pub lunch.  I enjoyed the ploughman’s lunch again, which comes with a small jar of a delicious duck and Madeira mousse, as well as chunks of cheese, pickles, ham and home-baked crusty seeded bread. We were served quickly which was just as well, because we were going along to the Britannia Restaurant at two o’clock to participate in a wine-tasting session.

Cunard World Club members who are Platinum or Diamond receive invitations to attend complimentary wine tasting (which costs $30.00 if you don’t have a free ticket).  Trevor and I got our invitations last week, but missed our session because we had something else on instead. However, Billy and Carole gave us their invitations, so we were going instead of them.  Cunard are so stingy when it comes to giving anything away for free, so we made sure we weren’t going to miss out this time!  🙂

So we went down to the restaurant for 2.00pm and joined another dozen or so people for the wine tasting.  Today, all the wines were from Australia; we tried a Chardonnay, a Reisling (which was not as nice as the proper German Reislings), a Cabernet Sauvignon and a Merlot – two reds and two whites.  A selection of cheeses accompanied the reds but, to be honest, you only got a mouthful of each of the wines – I certainly wouldn’t have wanted to pay 30 bucks for it.

Afterwards we returned to our cabin, where it had stopped raining outside and the sun was attempting to peep through.  We pottered around for a but before I took a long, leisurely shower and washed and blow-dried my hair, as tonight it was formal night once again.  Billy and Carole would be getting their Captain’s Cocktail Party before dinner, but we had more time to get ready for tonight’s theme, which was a Venetian Masquerade Ball.

I dressed in a gorgeous purple and black velvet and lace Gothic ballgown, with a black velvet bolero jacket.  The purple and gold Venetian mask I’d bought the other day went fantastically well with it, and my outfit got a lot of comments and compliments as we made our way to the Britannia Restaurant for dinner.

When we arrived at table #501, Billy and Carole were already there.  I had to remove my mask as it was a full-face one and I wouldn’t have been able to eat my dinner!  🙂

The meal was delicious as ever, and B & C had brought a bottle of Bollinger with them, on which they’d obviously paid the corkage.  We were therefore able to enjoy our second bottle of champers of the day, and the deliciously-chilled fizz went down a treat.  Here we were, 30 years married today, dressed up to the nines and eating gourmet food and drinking champagne, as the glamorous Queen Victoria transported us in style to our next inspiring destination.  How brilliant was this?!  🙂

Once the coffee and petits fours appeared, we ordered some after-dinner liqueurs; Benedictine for Trevor, Billy and Carole and Amaretto for me.  Thus fully sated did we make our way to the Golden Lion until it was time to go to the theatre.

As usual, Trevor and I sat in the front row, where we were starting to acknowledge the other front-row regulars, including two Australian women who’d been ‘keeping’ our seats for us.  🙂

The show tonight was called “A Stroke of Genius”, by the Royal Court Theatre Company, and in a colourful extravaganza it paired famous works of art with popular music and dancing.  It was certainly original and most enjoyable; in fact we have been well impressed with the evening entertainment all week; we’ve never seen a duff show yet.

After the show there was no visit to the Golden Lion or the Commodore Club tonight; instead we went to the Winter Garden up on Deck 9 because… the football was being shown on big screens. Yes!  Never mind the glamorous masquerade ball or the String Trio playing in the Verandah, Trevor wanted to watch the footie; the UEFA Nations league, England v Spain match.  We’d be able to see the second half.

As Billy and Carole hadn’t been to the theatre, they’d seen the first half in which England were winning 3-0.  We ordered some drinks and watched the second 45 minutes, in which Spain pulled a couple of goals back, making the final score 3-2 to England.  Since we were playing in Seville, England did well to win on Spanish soil, so we were happy with that score.

We then finished the evening off by going down to the Queen’s Room for the Masquerade Ball, drinking cocktails and watching the dancers; a lot of whom were wearing colourful masks with their sartorial splendour.  We didn’t get up to dance (I didn’t want to trip over in my long dress!) but we enjoyed the live music, the gently-swirling lights, and the opulence of the Queen’s Room.  No other cruise line does formal balls quite like Cunard do.  🙂

It was well after midnight when we returned to our stateroom, after a really great and memorable Pearl Wedding Anniversary.  We would be back in Croatia tomorrow morning, this time Dubrovnik.