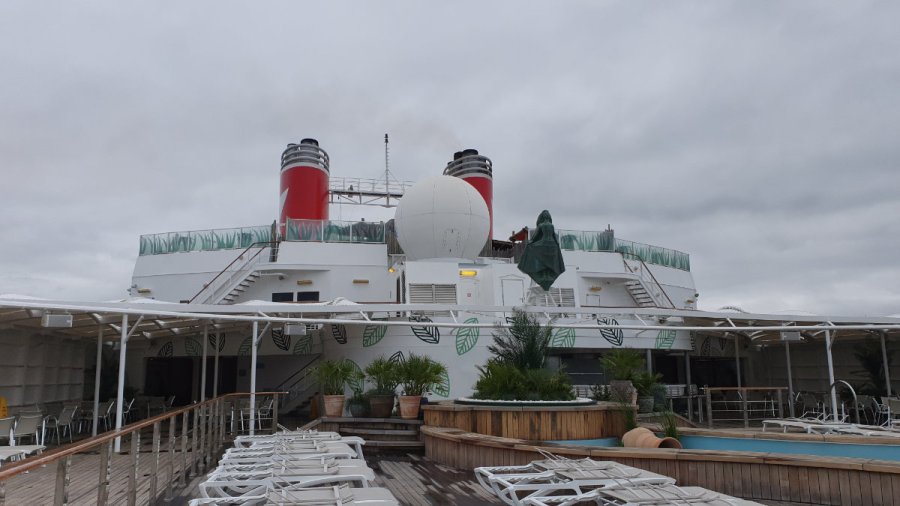 Today turned out to be one of those days where you have a great time just doing absolutely nothing, where you clear your mind of anything that is not-so-good, not thinking of anything serious, not watching/reading the news (we haven’t watched BBC News since we left home), not worrying about work or Covid or anything else.  As Bobby McFerrin once sang: Don’t Worry, Be Happy.  😊

We woke up around 7.00am to find that the Borealis was already at her unplanned stop in Greenock, and Trevor went up on deck to see if there was anything worth seeing.  A couple of buses waited dockside and, a few minutes later, he saw two crew members in full white protective clothing and masks being escorted onto one coach, while several others were directed to another.  We found out later that they would be taken to Rosyth and would have to spend 10 days in isolation on board the Balmoral which is temporarily acting as a quarantine ship there.  We felt that the whole situation was handled very professionally and efficiently, and we had no worries at all.

I got up around 7.40am and was once again greeted by cloudy skies and grey sea.  We went up for breakfast where I ate far too much once again (!) before we went out for a stroll around the deck; we didn’t stay out long because there was an uncharacteristic nippy wind blowing down from the north making me wish I’d brought my Craghoppers puffa coat (A coat! In July!)

We passed a pleasant morning pottering around before going into the Neptune Lounge for 9.45am where a bloke called Ian Archibald was doing a talk entitled “Above and Below the Waves of Scotland’s West Coast”.  Originally, this cruise was called “Lochs & Legends of Scotland” and should have been going around some of the islands and mainland anchorages and ports such as Stornaway, Loch Broom, Lerwick, Kirkwall and Invergordon.

However, due to the never-ending changes to the Covid rules the ludicrous decision was made that cruise ships would not be allowed to dock in Scotland, so our itinerary had to change.  To be honest, we were so pleased to be back on a cruise ship again we didn’t care where the Borealis was going.  😊

The talk and its accompanying photos were excellent, and we remained behind in the theatre for the next talk (also Scottish themed) called “Legends and Treasures of Scotland”, which covered things like the battles of Glen Coe and Culloden, and various valuable archaeological finds.  It too was a fascinating talk.  You know, we learn something every day on a cruise, and in the past I have actually made the effort to look up some of the stuff we’ve learned to find out more.  There is a lot more to cruising than just sitting on your arse eating and drinking (although that comes into it a lot as well).  😊 😊

On the topic of eating and drinking, the end of the second talk brought us nicely to lunchtime; we just went into the buffet and I enjoyed some cold meats and salad washed down with a glass of chilled cava.

We spent the afternoon doing the usual stuff that we do on cruises; watching the passing sea-scape, socialising (from a one-metre-plus distance) with our fellow passengers and enjoying a cocktail or two.  At one point Donald and Jackie (the couple who read my blog!) turned up and we chatted for a while and “compared notes” of our impressions of the cruise so far.  They are FOCL newbies and they said they were enjoying their cruise immensely. Jackie said that, before the cruise, she’d selected five dresses to bring and had put them into a dress-carrier, but had inadvertently left them behind!  So she was here, on a cruise, without any posh frocks!

My dear readers, be prepared to be impressed.  Jackie had spent the day of the formal evening using tiny little nail scissors, plus the little sewing kit you get in your cabin, to make a dress!  Yes, that’s right – to make a dress.  She cut up some silky pyjamas and a scarf and hand-sewed a bodice from it, which she then attached to a black skirt to make a long dress.  She showed me a photo of it and it was unbelievable; it was much nicer than some of the dresses we’d seen last night!  Top marks for resourcefulness – that was amazing.

We then passed 45 minutes taking part in the “Name That Tune” quiz in the Crow’s Nest at two o’clock.  There were 15 questions and you got a point for the song title and a point for the artiste.  Trevor and I scored 25/30 which we thought wasn’t too bad for a team of two, but FIVE other teams scored 26, so there was a five-way tie-breaker.  No prize for us once again!

We then went to another talk called “Life in the 1960s” which was very interesting and showed lots of old newsreels, including the Cuban Missile Crisis, the Profumo Affair and the Lunar Landings.  There were also clips from the popular music hits from the time, some of which I remember well from my childhood (I was born in 1961).  It was a great talk, but I had to leave five minutes early and hotfoot it up to the Atlantis Spa where I was booked in for a luxury pedicure.

It was fabulous; I sat in a high-tech chair which also gave me a back massage, while the beautician pampered my feet with a foot scrub and a foot, ankle and leg massage.  The big chair faced out to sea and I just chilled as I watched the Borealis gliding along on a very calm sea, while tootling panpipe music played gently in the background and the air was filled with the evocative scents of aromatherapy oils.  A thoroughly enjoyable experience which last an hour and a quarter and left me with lovely soft tootsies and nicely painted toenails.  It was under 40 quid, which is way cheaper than I pay for a pedicure at home!  😊

Instead of going to the main dining room for our dinner as usual, tonight we were booked into the Vasco restaurant, which specialises in authentic Goan cuisine.  The four-course meal was scrumptious and, amazingly, there is no surcharge for using this restaurant; it was completely free!  In addition, the service was excellent – the waiters were attentive without being intrusive.  Well worth visiting.

Once dinner was over, we made our way into the Neptune Lounge and sat near the front in one of the “groups of two” socially-distanced seats.  Because each group of two, four or six seats has two seats at either side, two in front and two behind blocked off, you have to get into the theatre in good time to bagsy the best seats.

The Borealis is currently sailing with 694 passengers instead of her usual 1,360-ish, but we weren’t getting the sense of a ship only half-full; I think all the passengers must go to the same places at the same time!  Therefore, there’s still plenty of atmosphere in the bars, restaurants and theatre – almost (but not quite) like normal, or whatever passes for ‘normal’ these days.  😊

Tonight’s performer was a Scottish guy called Gordon Cree and he was brilliant.  He sang in a rich baritone voice but he also played the trumpet and the horn, and was an absolute whizz on the xylophone; very entertaining.  He finished off his act by playing a very surreal version of I’ll Take You Home Again, Kathleen on the saw!  Yes – the saw.  That’s the first time I’ve ever seen that done on a ship.

Afterwards we went, as usual, along to the Morning Light pub for the evening trivia and met up with our ‘usual’ team mates Sid and Carol. Nope – we didn’t win.  There are some high-scoring teams on this cruise; either the questions are too easy or there are loads of Mastermind champions on the ship!

Then we finished off a very pleasant day by going up to the Crow’s Nest, where the band Funky Blue were performing lively, foot-tapping tunes.  It’s a nice atmosphere up there; not only is it a spacious, airy room with very comfortable sofas and chairs but everyone goes up there to enjoy the music and we easily get chatting to whoever is sitting at the next table.  It’s great!  One of the things I prefer about smaller ships; it’s very easy to make new friends.  😊

It was after midnight when we left the Crow’s Nest and returned to suite 6176 and our big comfortable bed with its rustly clean sheets and plump pillows.  Tomorrow we were due to spend the first day of a new month in St. Mary’s, Isles of Scilly. Once again we slept very well.