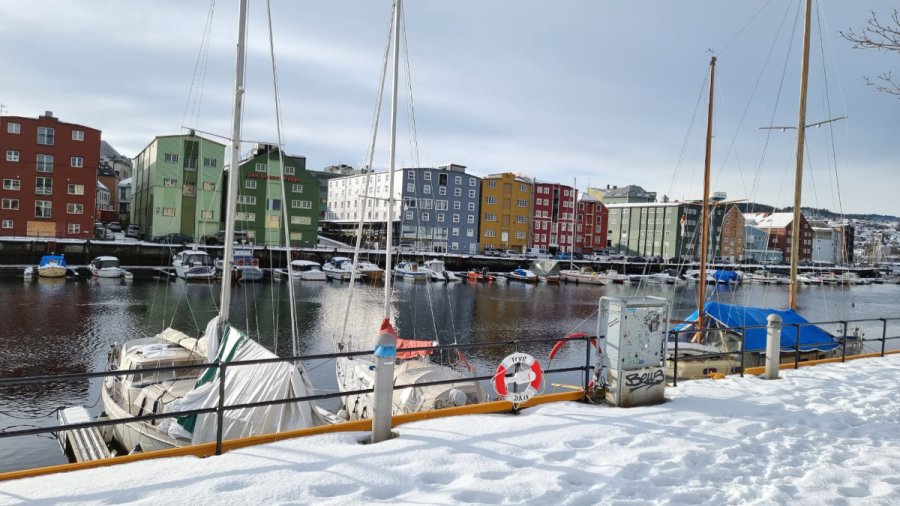 Woke up this morning after an excellent night’s sleep and looked out of the window at a cloudy sky, but one which promised some intermittent sunshine. The temperature was 2ºC – the first time since arriving in Norway that it had been above freezing. 🙂

We didn’t have any organised trips booked today, but the Borealis was docked fairly close the town centre, and we could see the distant spire of what we had heard was a magnificent 11th century cathedral, so we determined to explore it later on. Therefore, after the usual substantial breakfast in the Lido restaurant, we returned to cabin 3326 to put on our coats, hats, walking boots etc. before disembarking the ship around 9.30am.

Once again, the ground consisted of hard-packed snow and ice, although the immediate area in the port was well-gritted. It wasn’t too bad walking, but we had our ice-grips in the rucksack just in case. 🙂

It was pleasant strolling along, just looking at our surroundings. It’s always exciting to explore somewhere new, and we eagerly headed towards the cathedral, hoping we’d be able to find a bank on the way there (or back) to exchange our old currency. As we walked along, the sky darkened to an ominous dull grey; snow was expected today, and we hoped we would see snowfall at least once on this cruise and experience those big, silent flakes that make you want to put out your tongue to catch them. 🙂

We soon arrived at some streets where the sun hadn’t been able to melt the ice, and this was now time to put on the Spikies. Passing some houses and shops, the streets soon converged into a sort of square and, rounding a corner, we were rewarded with our first sight of Nidaros Cathedral (Nidaros Domkirke in Norwegian). On our first impressions it looked fabulous, especially the west front that had many amazingly detailed statues incorporated into the building itself, and a superb rose window. Coming from a cathedral city myself (Durham) I always mentally compare ‘our’ cathedral with every other cathedral I come across. 🙂 After taking several external photos, we purchased a couple of tickets and went inside.

Inside, the cathedral was amazing, and was much bigger than expected, with fantastic high vaulted ceilings and alcoves and stained-glass windows and statues. The rose window was particularly striking, with its stained-glass panels in shades of pink and purple.

Building of the cathedral started in 1070, over the burial site of King Olav II (reigned 1015-1028) who later became the Patron Saint of Norway. Since then, it has been the traditional place for the consecration of successive kings of Norway. The cathedral was completed and opened in 1300, but has obviously, since then, undergone repairs and renovations, the most recent being completed in 2001.

Another feature we found most interesting was the traditional Sámi altar, created by the South Sámi artist Folke Fjällströ to commemorate 100 years since the first national Sámi assembly was held in the methodist church in Trondheim.

All in all, we spent well over an hour inside the cathedral before continuing on our way. It was well worth a visit – a stunning piece of architecture.

Outside, we took a slow walk into the town centre trying, where possible, to walk on the parts of the pavement that were clear. As we made our way up a fairly steep bank, we saw a lady in wheelchair really struggling to get up the hill. Trevor asked her is she wanted a push, and she gratefully replied that it would certainly help. She wasn’t one of the passengers from the Borealis; she explained to us that we was an MP and was spending the day in a wheelchair so she could see for herself the daily challenges that faced her disabled constituents. Once we got to the top of the hill we asked her if she knew where we could find a bank that would change money, and she gave us directions.

Inside the bank, we asked one of the employees if they could change our old currency for us and we received a curt “No” (most unlike many of the Norwegians we had met, who were very friendly). We had almost given it up as a bad job before we came across a money exchange place; you know – one of those places like Western Union or an exchange bureau, that type of thing. We asked if they could exchange it for new Norwegian kroner and were told that they could, for a 20% commission. We decided, however, that 80% of something was better than 100% of nothing, so we agreed. Ten minutes later, we left the bank with some crisp new notes. As this was our last port of call before heading back to Liverpool I asked Trevor if we were going to blow the money here, in Trondheim, or change it into English money when we got home. We decided we’d keep the kroner and hopefully manage another trip to Norway this year, in the summer. 🙂

Mission accomplished, we decided to go back to the ship, arriving back around 1.45 pm and walking up the gangplank, our feet leaving Norwegian soil for the rest of this voyage. 😦

Norway! What a wonderful country – we were SO pleased we were able to visit once again.

Dumping our stuff in 3326, we made it up to the Lido restaurant just before the buffet closed at two o’clock. We enjoyed a light lunch washed down with the inevitable cold drinks, then returned to our cabin for a power nap and some R&R. 🙂

Just before five o’clock the slightly increased vibrations coming up through the decks signalled that the Borealis was getting ready to sail once more. Trevor went outside to have a look while I jumped in the shower and started getting ready in good time for dinner at 6.15pm.

As we were ready pretty early, we decided to go to the Oceans bar to see if we could find Mark and Jan, as they’d previously told us they liked to have an aperitif before dinner. However, there was no sign of them so we just enjoyed a cocktail each on our own (I had a good Aperol Spritz) before making our way to the Borealis restaurant, where we once again enjoyed a delicious meal and ate far too much. 🙂

We all have our daily routines and rituals in life and cruises are no exceptions. Anyone who’s been reading my blogs for a while will know what our routine is – dinner, then along to the theatre to watch the evening’s Showtime, then do the quiz in the Observatory, then listen to the live music, chat with our fellow passengers and enjoyed a few more drinks before retiring for the evening. 🙂

Tonight’s show was called “Forever 80s” and was brilliant. It featured the Borealis Show Company who performed a fantastic selection of lively 1980s music in the fashions of the time, such as ra-ra skirts and legwarmers, big hair and mullets and lots of heavy eye makeup in neon colours like royal blue, cyclamen, turquoise and bright green. We could see many of the passengers singing along and tapping their feet – it was very hard not to join in. What a great decade the 80s was for music.

Then it was up to the Observatory for the quiz and the live music of Funky Blue, the drinks and the chatting, and everything else that makes the evenings on board so enjoyable. We tried to put to the back of our mind that, after tonight, we only had two more full days of our holiday left. 😦

Back in cabin 3326 we settled down around 12.30am, as the Borealis carried us south at a rapid rate of knots. The sea was much calmer now, and the slight movement was soporific, sending us into a deep, dreamless sleep.