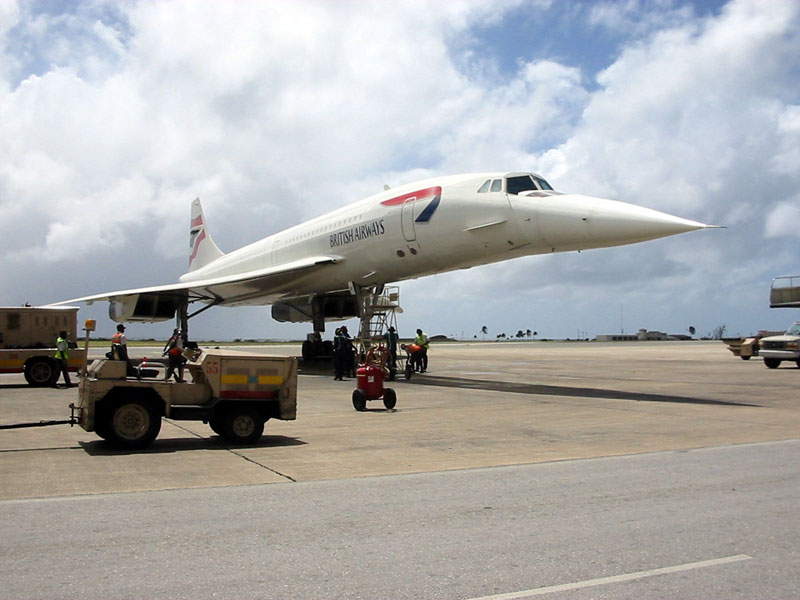 We are very proud and privileged to have flown on that technological triumph – Concorde – not once, but twice. The first time was on 1 March 2002 from London to New York, and the second time was 30 August 2003 from Bridgetown, Barbados to London.

The experience of flying on Concorde is utterly unforgettable. How else can you view the earth from nearly 11 miles high (in our case 58,000 feet) and arrive in New York an hour and a half before you leave London?

I make no apology for the use of the present tense when talking about Concorde. It’s just not right to refer to her as something from the past. She is in our hearts in the present and in the future… until something comes along to surpass her. If it ever does. The photographs were taken before and during our flights and I have included some explanatory notes – I do hope you find them interesting.

Our first glimpse of Concorde G-BOAE (Alpha-Echo) on the tarmac at London, Heathrow ready for the 10.30am flight to JFK, New York, on 1st March 2002. Just look at those lines! Concorde is small and sleek and holds 100 passengers. Contrary to popular belief, she is NOT cramped inside; leg room and seat-width is no different from any other business class flights.

The service, food and drink on board Concorde is superb (so it should be – you’ve paid for it!). Here I am enjoying the finest champagne and some pre- luncheon canapés, including Beluga caviar – yum. By the way, note the tiny size of the windows compared to other aircraft; they are only about the size of a large grapefruit.

The view of the LED readout from the front of Concorde’s cabin. Mach 2 represents twice the speed of sound. Concorde often flies at 60,000 feet – her optimum cruising height depends on several factors (don’t ask me what as I’m not an aerodynamicist!). On this particular flight we got to 57,000 feet. At this altitude you are well above any weather effects so the flight is extremely smooth, with no turbulence at all. The only time you feel anything is when the Captain puts on the afterburners to give Concorde that extra ‘oomph’ to break the sound barrier. Then you feel a little ‘kick’ – a bit like someone letting their foot off the clutch a bit quickly when driving a car.

What can I say but “Oh wow!”. A view of the earth from 57,000 feet. At this height you are over 10 miles high and the curve of the earth is clearly visible when you press your face up to the glass. You are flying in the stratosphere, on the edge of space, and the sky, as you can see, varies from a vivid, unblemished blue to a deep indigo shade as you look higher.

Incidentally, even though the outside air temperature at this altitude is about -50ºC, the windows feel quite warm to the touch. This is because of the air friction generated at Mach 2 (in this flight we reached 1280mph). Indeed, Concorde is coated in a special paint, as she grows 6 – 10″ in length during one transatlantic flight due to heat expansion.

The earth spins at about 1,000 miles per hour. When Concorde flies west, from London to New York, she flies faster than the earth turns. This means you go back in time… literally. An average transatlantic flight takes about 3 hours 30 minutes, and the time in New York is five hours behind London. This means if you leave London at 10.30am, you arrive in New York at 9.00am – an hour and a half before you left!

Who says time travel only happens in science fiction? When you fly to New York on Concorde, you arrive an hour and a half before you leave London. 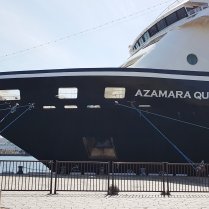 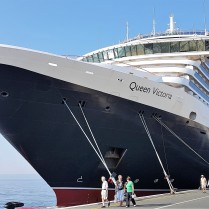 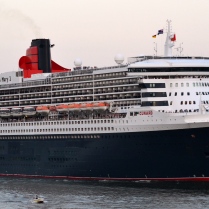